KANDAHAR / OSLO (Aftenposten): Very malnourished children flock to hospitals in Afghanistan. The country is heading towards a humanitarian catastrophe and no aid arrives.

Six-month-old Abasin is late to the hospital. Too late. The fever is ravaging the child. When you vomit, blood comes out. You are not getting enough oxygen.

The desperate mother squats by the bed and cries. So does the older sister, a four- to five-year-old girl. The father is in the hall. Only mothers can be admitted to all malnourished children in the crowded emergency department of the Mirwai Regional Hospital in Kandahar.

Between the beds are large oxygen cylinders. The hope is that it can help very sick patients. The children are hungry, have diarrhea, respiratory illnesses and fever.

In the last month, twice as many severely malnourished children have been admitted to the hospital, says Dr. Zainullah Zermal (35). It is a crisis that, in the wake of the Taliban takeover, is spreading throughout Afghanistan.

Before the end of the year, acute malnutrition could affect half of all Afghan children under the age of five. A million children could die warns the UN. The doctors fight so that little Abasin does not become one of them.

But they are very desperate. It is a battle that they do not know if they can win.

Too late for the hospital

Nasin, Abasin’s mother, cannot stop crying. As the Aftenposten reporter has entered the room, she puts on her blue burqa.

A transparent mask is placed in front of the child’s face. The mask is connected to a hose which in turn is connected to an oxygen bottle. But because the child vomits all the time, he does not get enough oxygen. The doctor is not optimistic.

– They came with him to the hospital too late. There is probably nothing we can do for this child, says Dr. Zermal of Abasin. He teaches daily at the university, but volunteers at the hospital. Here he works for free.

Zermal says that sadly, many parents wait too long before seeking help. This is due to several factors.

Most of the children come from very poor, conservative and remote areas.

Women, who are primarily responsible for caring for children, have never received an education.

Some may not have the money to be transported to the hospital. At the bottom is deep poverty and lack of food.

The number of visitors has doubled in the past month, hospital staff say. They see various reasons for this.

There is a desperate shortage of food. The local clinics no longer work. It has become easier to travel greater distances. The war against the Taliban is over, as the Taliban won. Before, children may have died in the villages. Now they are being transported to the hospital in the cities. But it often happens too late.

Millions of children will suffer from acute malnutrition

What the Aftenposten reporter has seen in Kandahar is something that is now happening across the country, the UN warns.

3.2 million Afghan children are likely to experience acute malnutrition before the end of the year, according to the World Food Program (WFP) and the United Nations Children’s Fund (UNICEF). This is half of all children under the age of five in Afghanistan.

For a million children, the situation could become so critical that they could die, the two UN organizations fear.

The unfolding humanitarian crisis in Afghanistan is so extensive that it is difficult to understand. It affects everyone except the top elite.

Only 5 percent of Afghan families have enough food to eat every day, according to surveys by the World Food Program. Half of the families say they have run out of food at least once in the past two weeks.

For the first time, WFP sees that even city families and what can be called a middle class are struggling with food shortages. In the past, food crises have particularly affected people in rural areas, where there have been two severe droughts in the last three years.

Four out of eight children are missing

It is not just the intensive care unit at Mirwais Hospital that is full. Downstairs, several rooms are completely filled with patients and families.

In a twenty-foot-square room, we see eight to ten malnourished young children, as do many mothers and often several other older siblings.

– I have had eight children, but only four of them are alive, says Bibi Zuhra, who is in the hospital with her son Matiullah, who suffers from severe malnutrition.

She says her son was already in poor condition when he was a baby, even though she gave him breast milk. When he picked it up, his arms and legs hung limply.

The neighbors’ wives assured him that the boy would be fine eventually. But it did not. The child would not grow up. Then his hands and feet became swollen. They made a hole in the boy’s skin, both in one hand and in the foot.

The hope now is that the doctors and nurses at Mirwais Hospital can save him.

I didn’t think the son would survive

Another mother says that the family is very poor. When they experienced that breast milk did not provide enough nutrition to the newborn Setare Jenan (seven months), they tried to give him bread and tea.

It made the boy vomit.

– He vomited so hard I thought his intestines would come out, she says.

The child was very thin and the mother did not believe that he could survive. But after five days in the hospital, there are signs of improvement.

– He hasn’t vomited since yesterday. With God’s help, he’s gotten better now, says his mother. She is still worried as her forehead is hot when he touches her. – Doctors say there are germs in his blood, but I shouldn’t worry. 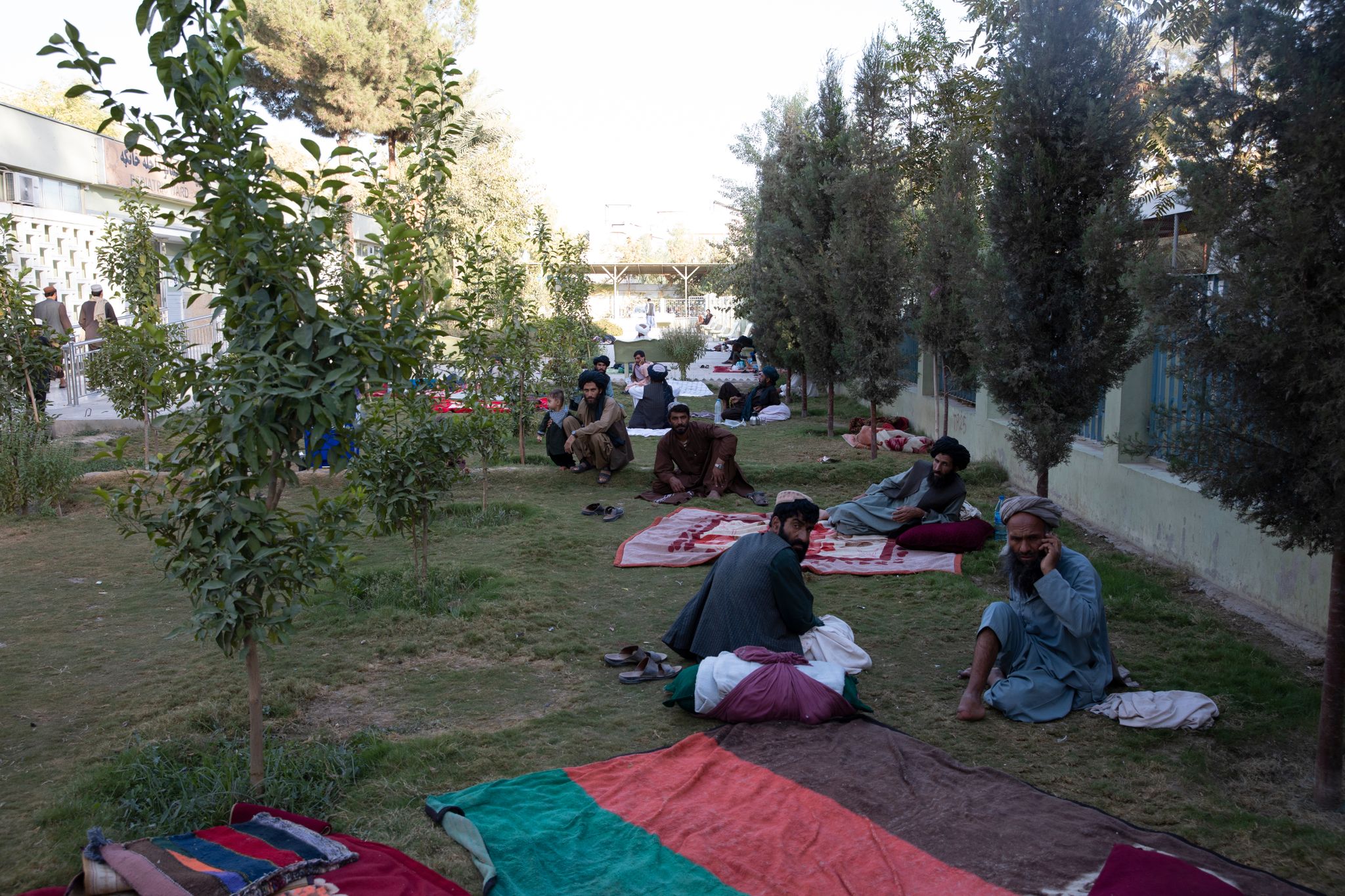 In many places in the hospital, space is tight.

Zaram has joined his mother in the hospital. His sister is hospitalized for malnutrition.

Men are not allowed to enter the hospital. Many of them wait on the grass outside.

Afghanistan was in dire straits even before the Taliban took power on August 15. The combination of war, severe drought and the aftermath of the corona pandemic caused many problems. Crops were destroyed, people were driven out, and many important goods, including food, had become very expensive.

This situation has intensified since the Taliban took power. Much has stopped. Some have fled the country, others dare not go to work, while many women are unsure whether the Taliban will let them work.

WFP and UNICEF report widespread unemployment, declining value of local currency and rising food prices. Cooking oil has become twice as expensive in the last year. The price of wheat has risen 28 percent.

One of the big problems is the lack of cash. Funds held by the Afghan central bank abroad have been frozen. The International Monetary Fund (IMF) also withholds funds. Afghan banks have introduced a kind of rationing. Every day there are huge lines in front of the banks. Each customer cannot withdraw more than a little more than 1700 crowns a week. It helps stifle the economy in a country where almost all transactions are done with cash.

– Asks the donor country to honor the promises of monetary gifts

Aid organizations are not putting the wheels in motion properly because they are short of cash, Country Director Astrid Sletten at NRC recently told Aftenposten.

The World Food Program and UNICEF have requested donations of NOK 1.7 billion, but not much has been received so far.

“We are deeply concerned about the desperate decisions that families are being forced to make,” said Mary-Ellen McGroarty, WFP Country Director.

– Unless we do something now, malnutrition will be even more serious. The international community must release the funds that they promised several weeks ago. Otherwise, the consequences may be irreversible.

All of this has to do with the Taliban who now rule Afghanistan. International donors would like to help bereaved Afghans, but are reluctant to support a regime that took power with arms in hand. It also doesn’t help that the Taliban are known for discrimination against women, human rights violations and brutal punishments. 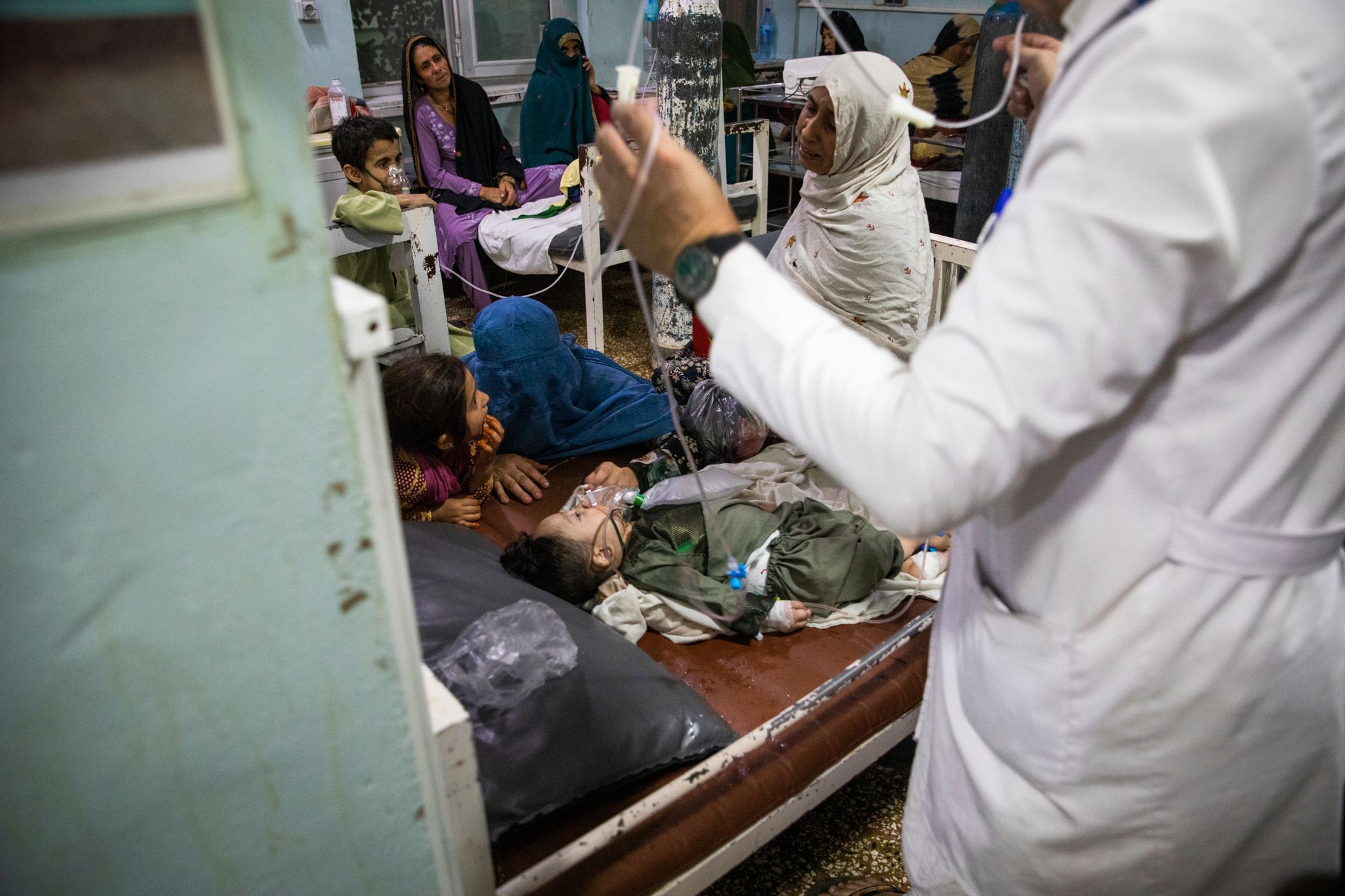 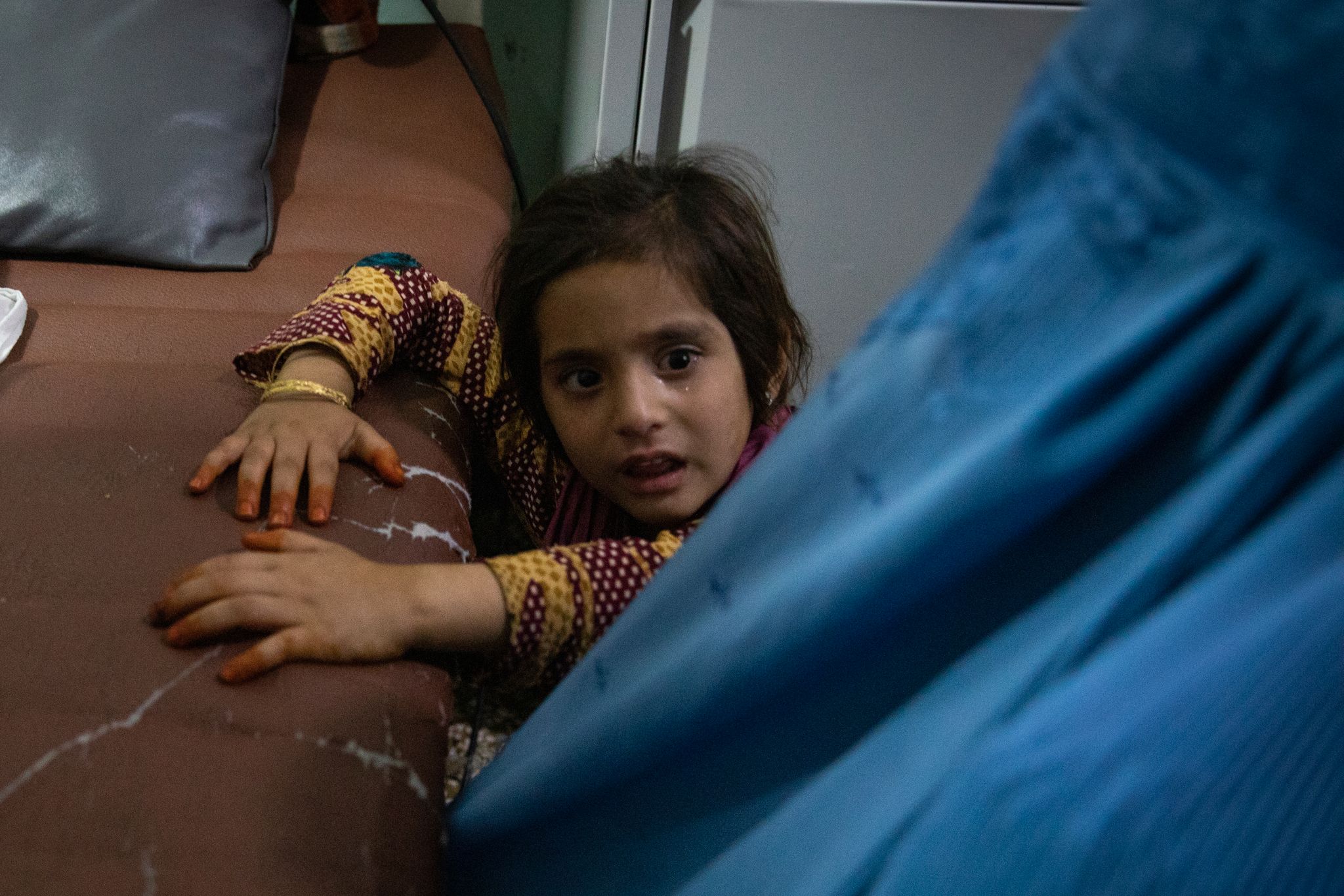 There are many malnourished children in the intensive care unit.

The older sister is very sad because her brother is very ill.

Before we leave Mirwais Hospital in Kandahar, what Dr. Zermal has feared will happen.

Six months Abasin dies. The mother and sister are inconsolable.

The father can now finally enter. She takes the scarf that has been hanging around her neck and wraps her dead son in it.

The hospital staff then take the child with them. He goes to the morgue. According to Muslim belief, a funeral should take place as soon as possible.

The parents leave the hospital building to cross the courtyard and head to the morgue. Then the mother’s body can no longer bear it. Halfway to the morgue, he faints. Her husband holds her in his arms until she recovers. Then they go looking for their dead son.